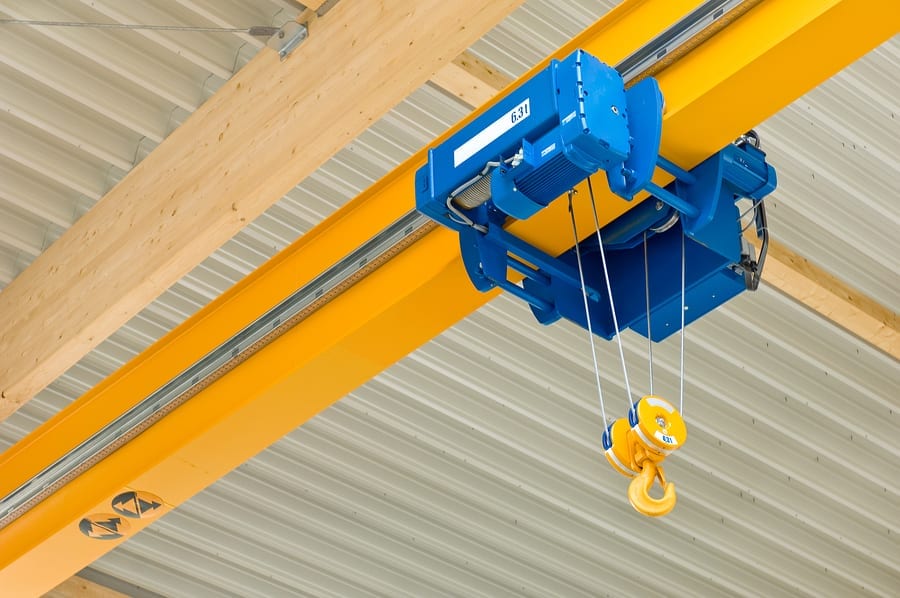 Overhead cranes are used to aid in the building and repair of machines and materials, particularly within factories, and any well-outfitted fabrication shop will have them at their disposal. An overhead crane runs on rails attached to ceiling beams laid out as parallel runways. The moving section, known as the trolley, includes a hoist, which lifts objects. The trolley, which is carried by a bridge that is perpendicular to the rails, is attached to a wire rope hoist, which allows for easy load handling and safe operation. These machines are such a common site in fabrication shops today that it is difficult to imagine the industry without them. Finding a fabrication company with these cranes is essential if you want your project completed efficiently.

The industrial revolution of the 19th century introduced a series of innovations that laid the foundation for modern cranes, starting in Germany as early as 1830 with Ludwig Stuckenholz. His innovative company later became Demag Cranes, still a thriving company. A huge innovation arrived in the early 1960s with hydraulic gantries, which were useful in lifting tall equipment. Today customization has become a key factor that allows these machines to further evolve for specific needs, such as handling up to 400 ton loads.

There are a wide variety of overhead cranes, but most of them fall into one of the following four configurations. Here we are excluding the less-common gantry cranes and jib cranes, which include booms similar to what you’d see on mobile or construction cranes. In some applications only a trolley hoist is needed.

How Overhead Cranes Differ from Other Cranes 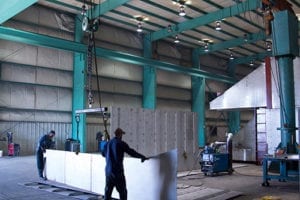 Overhead cranes are nothing like the construction cranes used to build skyscrapers or bridges. Instead, they are often used in steel or other metal manufacturing, along with maintenance applications within a huge industrial facility. Gantry cranes can be used for multiple purposes including outdoor applications. What separates a gantry from overhead cranes is that the bridge that carries the trolley is supported by two or more sturdy legs.

Here are some of the features that distinguish overhead cranes from the typical Caterpillar cranes you might see in commercial construction projects:

The general concept of most overhead cranes is based on a trolley with wheels that moves across a bridge supported by runway rails on runway beams. Extending from the trolley is a hook block hanging from wire rope. The hook block is what lifts objects that are then transported by the trolley. Crane operators use radio control devices to move objects, but cab-operated cranes have cabs at the bridge or trolley that seat an operator. 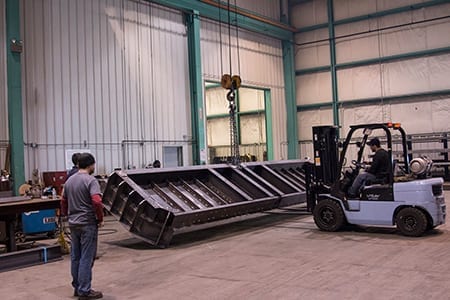 All crane operators and their employers in America must comply with federal safety standards set forth by the Occupational Safety and Health Administration (OSHA), a division of the U.S. Department of Labor. Thanks to stricter regulations and better enforced safety standards of the past several decades, there has been an enormous reduction in on the job injuries. It has also led to safer and more reliable equipment.

One of the most important aspects of safety inspection is making sure the wire rope is in top shape and doesn’t have any kinks or damage. Inspection of the drum, in which the wire winds around, is also important for safety, along with inspecting the hook and its latch for weld marks, cracks or deformities. The crane includes brakes for better control at slowing down the trolley. Operators are not allowed to exceed the load-tested capacity of the cranes they use.

Overhead cranes are very practical for moving items used to manufacture metal products, especially when high temperatures are involved. A typical overhead crane allows the operator to move the trolley with a pendant, which is suspended from the hoist as the operator walks alongside the load or on a platform that allows the operator to move independently from the load. This allows you to do work without clearing aisles and provides maximum safety. Cranes are also very customizable and adaptable and can handle heavy loads, as well as help increase productivity. If you need heavy work done and your fabrication shop does not employ overhead cranes you may want to look elsewhere for help.

Swanton Welding fabricated two truck dump platforms. These are used in various industries where semi or other large trucks are driven onto a platform for unloading.  After securing the truck, the platform is raised high into the air, and the load on the truck is transferred via gravity into a bin or hopper. Our client builds […]

A customer from the water treatment industry approached Swanton Welding & Machining to fabricate a mixing tank assembly. The 50,000 lbs. tank assembly was made up of many different parts and systems including rapid mix, reactor and clarifier tanks, a 16′-8″ long platform, and a 15′ high draft tube. To fabricate these components and many […]

A client proposed and drew the initial design of this support steel project. It will encase and support a glass melting furnace for the engineered reinforcements industry. Swanton Welding supplied materials such as tie rods, platform steel, stairs, and ladders for the 20 ft tool glass melting furnace. Fabrication, blasting, and painting were customized to […]

This custom fabrication project was for approximately 30 Bottom Casings for a Glass Furnace. Each section had to have pads custom machined to ensure it was within 1 mm of flatness. After the individual casings were completed, we had to shop assemble the entire length of them and use a transit to ensure their critical […]

It is basically the structural arm for a heavy duty conveyor ship loader.

Barge Stabilizer Swanton Welding took on a project with a simple goal: support a 1500 tons crane with two barges. The heavy duty steel frame binding the two barges together, and the crane would be used to drive in bridge pilings.

We custom built a large Discharge Hopper, a Clarifier used to remove slurry, the Clarifier Structure, accessible Catwalk & Stairs, and a custom Auger for the Clarifier. The most interesting thing about this project was its overall size and the custom auger we built.

The project involved making a hopper & separator for a tire recycling plant. The hopper was designed to dump truckloads of used tires. It has a motor and sliding floor system that was sloped to feed the tires to the separator, which would separate the tires based on size and feed them to additional equipment […]

We custom fabricated this stainless steel hopper and finished it off with a polished interior for food grade application.

Fabricated stainless steel Catalytic Converter w/ Pipe Bundle. A customer approached us about doing this job out of stainless steel with the stainless pipe bundle being made out of a special seamless tubing. The timeline was critical as the customer had a two day plant outage scheduled and they needed this unit installed during that […]

We built a 125 Ton Steam Car. We fabricated it, blasted and painted it, did the assembly, electrical work, and shop tested it.

A customer from the gas exploration industry approached Swanton Welding & Machining to fabricate an A36 and A-514 steel thrustframe weldment. The 225,000 lbs weldment was fabricated using a variety of processes, including CNC milling, MIG welding, drilling, laser cutting, bending, tapping and forming. The 54′ long and 8′ wide thrustframe was skillfully fabricated using […]

Customer needed a way to conveniently transport large ladles to areas where they will be used.

Fabrication of two large canopies out of steel tubing to be installed at an airport. The canopies were fully assembled in shop prior to shipping. Both canopies were hot dip galvanized to withstand the corrosive installation environment.

Fabrication and shop assembly of a gasholder digester cover.

Swanton Welding & Machining was approached by a chemical industry customer to fabricate a 125,000 lbs. acid furnace. We first drafted complete shop fabrication drawings for the furnace using AutoCAD software. We then used a variety of fabrication methods to complete the A516 grade 70 and A-36 grade steel furnace, including: drilling, rolling, laser cutting, […]

Structural Steel Tower This project consisted of constructing two similar towers. The entry side is pictured and the exit side can be seen in the distance. This new customer to Swanton Welding requested the project to be finish painted before it was delivered. These structural steel towers were assembled in the field and required very […]

These were vertical clarifier tanks used to separate certain materials from water.

An agricultural industry client approached Swanton Welding & Machining to fabricate twelve, 5,000 lbs conveyor components. Utilizing AutoCAD 2009, we first drafted complete shop fabrication drawings of the component. We then fabricated the 20′ long, 3’6″ high and 8′ wide conveyor section using a CNC beam line, saws, and drills. After fabrication, during which we […]

For the past 10 years Phil Function has been calling Swanton Welding in Wauseon, Ohio home. When asked what kept him at Swanton for so many years, Phil doesn’t hesitate to mention the personnel who [Read More]

For the past 2 years, we've put together a video Christmas card that was hopefully sincere with a bit of added humor and entertainment.  This year, we are being a little more serious. We wanted [Read More]

Swanton Welding Company has a commitment to continuous excellence. We invest in the best fabricators, the best training and certifications, and high-quality equipment that will allow us to handle any [Read More]